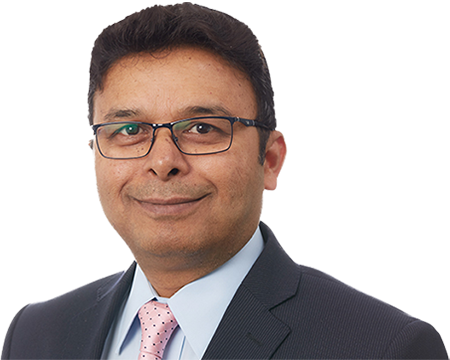 Mr Arunmoy Chakravorty is an experienced Consultant Breast Surgeon with special interest in breast aesthetics, breast diseases and surgical oncology. He is one of the few breast surgeons in the UK, who has been certified in Cosmetic Breast Surgery under the Cosmetic surgery certification by The Royal College of Surgeons. Mr Chakravorty has a tertiary referral practice for cosmetic breast surgery, breast augmentations, symmetry surgery, immediate and delayed breast reconstruction.

His practice covers the diagnosis and management of symptomatic and screen detected breast cancer including oncoplastic breast conservation and nipple sparing mastectomy with immediate breast reconstruction. As a Specialist in Oncoplastic and Aesthetic Breast Surgery, his practice ethos is to ensure optimal oncological clearance of breast cancer with best possible cosmetic outcomes following surgery.

He is committed to research, teaching and training with Honorary Senior Clinical Lecturer role at Imperial College, London. On the academic front, he has been invited to present in national and international breast meetings. He has been actively involved with research in intra-operative molecular assessment of sentinel lymph node biopsy. He is an ABS member and firmly believes in delivering high-quality evidence based comprehensive breast cancer care.

Mr Chakravorty qualified with honors in 1992 and became a Fellow of the Royal College of Surgeons of Edinburgh in 1999. Having spent time in research, looking at the “Effect of Vitamin A and Corticosteroids in wound healing”, he completed his higher specialist training in 2009 (South West Thames London rotation) with special interest in breast and cosmetic surgery. He obtained specialist breast training at The Royal Surrey County Hospital, Guildford and The Royal Marsden Hospital, UK. He complemented his training further with an Oncoplastic Fellowship at The Royal Marsden Hospital, London. His plastic surgery experience includes Senior Residency at Safdarjang Hospital, New Delhi, India (University Hospital for Burns and Plastic Surgery). He further consolidated his international experience by attending workshops and professional master classes in breast reconstruction and cosmetic breast surgery in Germany and Austria.

After completing oncoplastic fellowship at The Royal Marsden, he took up a substantive position at Colchester University Hospital as a ‘Consultant Breast Surgeon with special interest in Oncoplastic Surgery’. Having worked there for nearly five years, establishing the breast oncoplastic service in North Essex, he has now moved to the Breast Unit at The Hillingdon Hospital NHS foundation Trust, London with a view to improve oncoplastic and reconstructive breast services. He also holds an Honorary contract with The Royal Free Hospital NHS Trust.

He has actively promoted the sub-specialty of oncoplastic breast surgery and is a tutor in MS Oncoplastic Course, East Anglia University. He is an examiner for The Royal College of Surgeons, Edinburgh and for MS Oncoplastics in the University of East Anglia. With his active contribution in teaching, training and research, he has been awarded Honorary Adjunct Title of International Professor by AHERF, New Delhi, India.

In line with Government and Public Health England advice on the ‘stay alert’ policy and ‘social distancing’ that continues to be in place. We are currently open and have restarted surgery with new precautions in place to ensure patient safety from COVID-19.